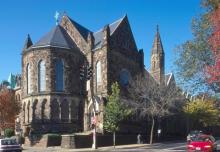 Yale’s third student Chapel, it was constructed in 1874-76 as Yale’s Civil War Memorial, and named for Joseph Battell (1774-1841) who made a fortune in cheese, trading and land speculation, by his son. The architect was Russell Sturgis, Jr., who also designed Farnam and Durfee Halls – the adjoining residence halls.   The architectural style is “High Victorian Gothic” –  a Victorian revival of Medieval Gothic styles – fitting to Yale’s “Collegiate Gothic” architecture, though perhaps unusual for a university founded by Congregationalists – best know for plain and pure white New England churches.  The Chapel seats 850.
The Chapel was the home of the Church of Christ in Yale, formed in 1757 when Yale split off from the Congregational church of New Haven to create its own church.  The all-male, mostly Protestant student body of the time was required to attend services here until 1923; after that services were voluntary.   The interior of the Chapel has been renovated many times – a screen across the Chancel removed, a central pulpit removed, front pews removed to make room for performances, etc.   In 1984, the Chapel underwent a full restoration to its Victorian colors, stenciled decorations and gilding – which had been painted over in later years.  The current Holtkamp pipe organ was added in 1951, replacing a smaller earlier organ.  The Transept Organ (Ellen Battell Stoeckel Memorial) and Apse Organ (Thorne Family Memorial) can be played from consoles in either location.  The organ was also restored in 1984.
The Chapel is used today for many different religious services – the Sunday service of the University Church in Yale (10:30 a.m.), the successor to the Church of Christ in Yale; Jewish high holiday services, Muslim Iftar meals during Ramadan, Buddhist programs, and monthly gatherings of Yale’s evangelical Christian groups.  The Chapel is also used for concerts by campus and town orchestras, lectures, and many other major events.
The tower on Old Campus holds five unmatched bells, which rang the quarter hour on a mechanical clock until the 1960’s, when students’ complaints about the noise convinced Yale to stop the clock.

The Apse Memorial Windows were designed by the architect Russell Sturgis and installed by Slack, Booth & Co. of Orange, New Jersey in 1876. At the top of the center window appears the name of an early benefactor of Yale University, Elihu Yale, and around his name are the names of the first nine Presidents of Yale College.  Stained-glass windows flanking the nave commemorate benefactors and professors of Yale, many of whom were theologians, including Jonathan Edwards, Bishop George Berkeley, Nathaniel W. Taylor and many others.  A Tiffany window in the northwest upstairs corner was created in honor of Samuel Wells Williams, first professor of Chinese language in the United States.  A Maitland Armstrong window in the nave pictures the philosopher Seneca, given in honor of Professor Thomas Anthony Thacher, distinguished professor of Classics.

Accessibility: Accessible entrance from Old Campus. Drop off at Phelps Gate or High Street Gate. Accessible bathroom is located in the Chapel on the main floor.