Home » News » May We All Become Pathfinders

May We All Become Pathfinders 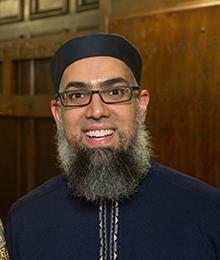 The Qur’an asks us, “Where, then, are you going?” (81:26). We live in an age of seemingly incomprehensible turmoil. Amid such political and environmental tribulations, our American society is in the grip of xenophobia and anti-Muslim bigotry. More than ever, the nation must re-examine its assumptions about Islam and relationships with Muslims.

Our approach to Islamophobia needs to evolve. Even the term – Islamophobia – is problematic. It’s a tactical way to contrive a narrative that keeps the focus on the fear and suspicion and marginalization of Muslims. These same tactics are used by xenophobes to marginalize other minorities; Muslims are the enemy du jour.

We need to empower the “choir,” Muslims and non-Muslims who understand the problems, by offering accurate information and building the confidence to create an alternate narrative, one of welcome and belonging.

As a college Muslim chaplain, among my many privileges is to oversee the religious and spiritual dimensions of my students’ experiences. Muslim students are quite anxious about the grossly distorted images of Islam that are causing discernable anti-Muslim violence. Daily I see the emotionally and spiritually debilitating effects that Islamophobia has on Muslim students and communities.

What kind of community do we all want to build? This, I believe, is the essential question of our time, and perhaps throughout the ages. The Qur’an’s existential question – “Where, then, are you going?” – invites us to dream how we can transcend the negative forces and bring out the positive counterforces around us by cultivating both introspection and vision.

• Education: As teachers, preachers, and mentors, we must help today’s students – Muslim and non- Muslim – delve into a deep and informed sense of Islamic literacy. Present this learning in welcoming spaces and study circles where doubt is allowed and questions are explored about the power and future of Islam in the world. We need Muslim spaces where Muslim students are comfortable sharing reflections, and we need open spaces where other students of faith can share their perspectives on religious identity. We need hospitable off-campus programs, in mosques and churches and temples, that promote serious religious literacy.

• Engagement: Our Muslim students should reach out across campus organizations to make allies. This entails literally showing up and being present in campus life. Actual relationship-building is an underestimated virtue in today’s competitive, bottom-line, overscheduled social atmosphere. The Kaba, the iconic black cubed building and focal point of millions of Muslims prayers, has different gates for entering the sanctuary. Similarly, our communities need multiple entrances for guests to walk through as avenues of conversation and encounter. Let us take note: Research shows that people who harbor the worst stereotypes of Islam and Muslims are those who interact least with Muslims. Again, mosques and non-Muslim congregations are positioned to encourage new relationships and friendships, modeling an ethic of “radical hospitality.”

• Empowerment: Nurture confidence in students’ faith, moving it beyond education into consciousness. Teach them about homiletics, public speaking, and dialectical conversation on difficult faith questions. Give them a sense of rootedness and belonging. Reacting to world events by just always “doing something” doesn’t necessarily solve the deeper issues. We cannot play into the arbitrary narratives of the opposition that demand a defensive response from victims. We must build both intra- and intercommunal resilience – and feel empowered to defend each other from malicious attacks, whether from religious extremists or anti-religious forces.

We all have serious work to do – particularly Christians and Muslims – in order to craft the healthy relationships we envision. Like many other concerned Muslims, I navigated the aftermath of 9/11 by getting involved in interfaith work and educational outreach. I have discovered new friendships and forged lasting alliances through these interfaith experiences. This work is a both a blessing and a responsibility, and it allows us to become bridgebuilders and goodwill ambassadors. It reaffirms my faith in the power of the Prophet Muhammad’s teaching that, “None of you truly believes until he loves for his brother [and sister in humanity] what he loves for himself.”

In many places, exemplary multifaith efforts are thriving, but we as people of faith and conscience must map out new paths of peacemaking in our respective environments. May we all become pathfinders – amen!

Issue Title:
All Together Now: Pluralism and Faith
Issue Year:
2016

Reflections print orders of current and back issues are available through the Yale Divinity School Student Book Supply.

Omer Bajwa is coordinator of Muslim life in the Chaplain’s Office at Yale. He has been involved in religious service, social activism, and educational outreach since 2000. He received an M.A. in Near Eastern studies from Cornell University. He also earned an M.S. in communication from Cornell, and a B.A. in English literature and rhetoric from Binghamton University (SUNY).